Promoter and patron of the architect Antoni Gaudí

Eusebi Güell i Bacigalupi is known today primarily for his support of the architect Antoni Gaudí and the buildings that emerged from it. The famous houses often still bear the name of the patron Güell.

Without his patronage, most of Gaudí's works would probably not exist today.

The life of the industrialist Eusebi Güell

Eusebi Güell was born in Barcelona in 1846, the son of the industrialist Joan Güell i Ferrer and the noblewoman Francisca Bacigalupi. His father supported Eusebi and made it possible for him to study law and economics in Barcelona with stays in France and England.

Eusebi continued his father's business in Barcelona. It benefited from the onset of industrialization at the end of the 19th century. Above all, he was successful in the textile industry. Eusebi Güell also benefited from an inheritance that his father had left him. Countless lands and plots of land that experienced a huge increase in price as Barcelona expanded.

By today's standards, Güell's fortune is estimated at around 70-80 billion euros. At that time he was one of the richest people on earth and was by far the richest Spaniard.

In addition to Gaudí, he promoted art in general and social projects. Its factory workers received good wages, had comparatively good working conditions, and benefits that were unusual at the time. In the Colonia Güell the workers had good housing, medical care, schools, theaters and churches. However, this may not have been entirely unselfish: factory colonies were also founded to keep employees away from the social unrest in the cities.

In 1871, Güell married Luisa Isabel Lopez y Bru, with whom he had ten children.

In 1875 he became a member of the city council of Barcelona and three years later a deputy of the provincial parliament of Catalonia.

The friendship between Güell and Gaudí

A perfect symbiosis: Güell, the rich industrialist and Gaudí, the brilliant and creative architect. Güell had the money to give free rein to Gaudí's creativity and also to encourage it when he devoted himself exclusively to the Sagrada Familia. Through Güell's contacts, lucrative and important orders could also be placed with Gaudí.

The friendship between the two men began in 1878, when Gaudí received a smaller order from a well-known glove factory. He was to design a showcase for the presentation of his products at the world exhibition in Paris. Güell, fascinated by the perfect harmony of the materials wood, iron, glass and ceramics, recognized the talent of the young architect. He got in touch with Gaudí after his return to Barcelona. A friendship developed that lasted until Güell's death in 1918.

With Güell's support, Gaudí knew how to move in the "upper circles" and establish contacts. Güell was a special supporter and patron of the arts, both of whom shared a deep religiosity in addition to their business interests.

Güell's favorite architect was undoubtedly his protege Antoni Gaudí. The fact that this connection left a lasting impression is already evident from the UNESCO World Heritage List: alone three of his commissions to Gaudí are on this list. 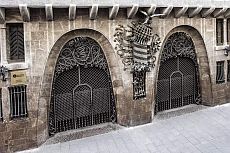 The City Palace is Antoni Gaudí's first major work for his patron Eusebi Güell. The house near the Ramblas is partly reminiscent of a Venetian palace. 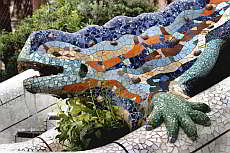 Gaudí was to build an entire settlement for Eusebi Güell. A few houses, the market and a beautiful park were completed. 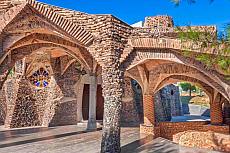 Gaudí was supposed to build a church in the workers' settlement of Colonia Güell. The crypt was his experimental field for the Sagrada Familia. Although unfinished, it is a highlight of Gaudí's work. 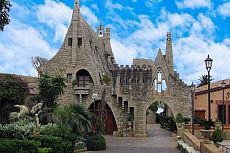 Bodega Güell, or Celler Güell in Catalan, is a winery in Garraf. This place is located between Castelldefels and Sitges and belongs to the Sitges region. You can eat well in this interesting building today.

Buildings by Güell not shown above

The Güell Pavilions are the first commission Güell gave to Gaudí. It is a very small commission compared to the later works Gaudí built for Güell: a horse stable, a gatehouse and the wall surrounding the finca. The buildings are served by the Bus Touristic (stop "Palau Reial"), but can also be visited (in groups, on Saturdays and Sundays, at 10.15 in English, 11.15 in Catalan, 12.15 in English and at 13.15 in Spanish). Address: Avinguda de Pedralbes, 7.