You are here: barcelona.de > Excursions > Dalí and the Dalinian Triangle

Salvador Dalí and the Dalinian Triangle

Dalí Museum in Figueres, Mansion in Portlligat and the Gala-Dalí Castle in Púbol

Figueres is the birthplace of Salvador Dalí (May 11, 1904 – January 23, 1989), an artist who was as unconventional as he was brilliant. Figueres would certainly not be as well known today without its museum: the Dalí Museum in Figueres is of course the top attraction of the place and is one of the most visited museums in Spain.

The Dalí excursions from Barcelona

You have the choice between private - the guide is there exclusively for you - and open - you are together with other guests in a group - excursions to the work places of Salvador Dalí. 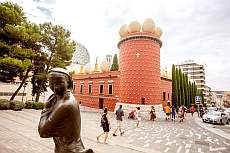 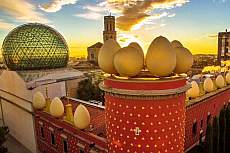 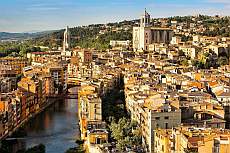 At the corners of the so-called Dalinian triangle are the communities of Figueres with the Teatre Museu Dalí, Portlligat with Dalí's house and Púbol with the castle of his leisure Gala. The space occupied by the triangle contains the elements that define Dalí: museums, landscapes, light, architecture, customs, legends, gastronomy and much more. If you want to understand Dalí, you should experience the Dalinian Triangle.

Locations of the Dalinian Triangle

The Teatre-Museu Dalí in Figueres

The Teatre-Museu Dalí is world famous. Built on the remains of a theater that burned down during the Spanish Civil War, the museum was inaugurated in 1974. The museum in Figueres was designed and planned down to the smallest detail by Dalí. In the foyer of the theater was the artist's first exhibition. Some remains of the theater have been preserved and integrated into the new museum building. The glass dome, under which the crypt and Dalí's coffin are located, can be seen from afar and is a special landmark of the city of Figueres.

The museum now houses over 1500 works of all types of art: paintings and drawings, photographs, sculptures and photographs, installations and engravings. The childless Dalí bequeathed the museum to the Spanish state. Dalí was buried in the museum.

During the tour of the museum you will get to know all the creative phases of the brilliant artist. Dalí himself said of his museum: "It is obvious that other worlds exist, that is for sure; but as I have said on many other occasions, these other worlds are inside us, they are on earth and they are precisely at the center of the dome of the Dalí Museum, which contains the new, unsuspected and hallucinatory world of surrealism."

The museum also exhibits works by other famous artists such as, whose works Dalí also bequeathed to the museum.

Those who haven't had enough of Dalí should check out the artist's quirky home in Portlligat. Already on the way there you will experience the imposing landscape. The place is very attractive on a peninsula of the northern Costa Brava.

Dalí bought a small fisherman's cottage in 1930. For over 40 years he expanded his house based on the simple hut. Salvador Dalí described his home in Portlligat as "the place of production, the ideal place for his work. Everything fits: time passes more slowly and every hour has its own dimension. There is a geological calm: it is a unique case".

In 1932 he renovated a second hut, which he had bought just a short time after the first hut. This served as the entrance, dining room, living room, workshop and bedroom of his house. Further additions followed. From 1935, master builder Emili Puignau was responsible for the construction and renovation work.

From the beginning of the Spanish Civil War, Dalí and his wife Gala moved to the USA. They did not return to Portlligat until 1948. Further expansion work followed and from 1949 all extensions were habitable. But the house continued to grow, so his new studio was completed in 1950, and the bedroom was also moved to a new extension. Dalí himself lived in the house until 1982. After Gala's death, he moved into the castle he had given her.

His home is now a museum. The opening hours vary depending on the season, it is closed over the winter. A visit to the Dalí House in Portligat is only possible upon prior booking.

The Gala Dalí Castle in Púbol

When Dalí bought his wife the medieval castle in 1969, it was in a sorry state. The walls had cracks, the beams were rotten and the inner courtyard was neglected. Dalí's plan was to provide a quiet and secluded place for Gala.

The basic structure itself dates from the 11th century. It consists of three floors arranged around a narrow courtyard. The building was expanded into a castle in the second half of the 14th and early 15th centuries during the wedding of the Púbol barons.

Dalí tried to preserve the romantic atmosphere during the restoration work he carried out. He used the walls and half-collapsed ceilings and used them to create unimagined rooms of different sizes. The interior finishes result in mysterious, private, austere and sober spaces of great beauty.

Púbol Castle is an important place of Dalini creation, it is a continuation of Portlligat. Dalí determined that he was only allowed to enter the castle after Gala had invited him in writing.

After Gala's death in 1982, Dalí moved from his home in Portlligat to the castle, where he built his last studio. Gala was buried in a mausoleum in the castle.

On your own to Figueres and Portlligat

Even if you are traveling by yourself, we recommend that you book the tickets for the entrances in advance in order to avoid long waiting times and to get a seat at all. The Dalí sights are often fully booked.

How to get to Figueres from Barcelona by train
From Barcelona, ââa train goes directly from Sants central station to Figueres. You can find the timetable on the RENFE website.

Access to Figueres by car
Figueres is about 200 kilometers north of Barcelona. Those who travel to Barcelona by car usually come via the A7 motorway anyway. This leads past Figueres and the path is signposted.

Why visit the Dalinian Triangle

The three locations of the Dalinian Triangle are all worth visiting. Visit the fascinating surrealistic world of Salvatore Dalí in his museum in Figueres. At the latest when you have dealt with his works of art here, you will love his art. Then of course you should also visit the picturesque village of Portlligat and its home. Here, too, you can clearly see Dalí's handwriting. Equally fascinating is his wife Gala's home, the Gala Dalí Palace in Púbol.

In addition to lots of art, you will experience the natural beauty of the Costa Brava. Dalí deliberately chose this spot, the landscape and the rugged coast were his inspiration.

The Dalinian Triangle makes a perfect addition to any Barcelona visit, especially if you are staying longer in Barcelona or have a particular interest in Dalí. Here you can book private and open excursions.