Culinary delights to make yourself

The first cookbook to be written in a Romanic language was written in Catalan; the book "El Libre de Sent Soví". Since this recipe collection appeared in the 14th Century, the local Catalan cuisine has been an important part of the Catalan culture.

With our original Catalonian and Spanish recipes you can enhance your stay in Barcelona, or enjoy a bit of the Spanish way of life when you get back home.

The typical feature of Catalonian cuisine is the combining of ingredients from the sea and the mountains - the so-called Mar i Muntanya dishes (sea and mountain). A characteristic example is shrimp with chicken. Sausage specialties are also typical, which are just as popular throughout Spain. Xoriço paprika salami (chorizo) - produced from the black Iberian Cerdo pig - is most often used as an ingredient in Catalonian dishes. Desserts are usually very sweet - and of course very tasty...

Catalonian cuisine is also influenced by the neighboring regions, and of course the opposite is also true. Thus, the paella originated in Valencia and was prepared with chicken. In Catalonia, the paella has developed into a Mar i Muntanya meal by adding prawns as an ingredient or cooking with seafood. In general, Catalonian cuisine is a Mediterranean cuisine with lots of fresh vegetables, fish and seafood, but not too much meat. Nevertheless you can find a variety of different meat dishes on the menus of restaurants.

You can happily drink a beer with your meal in Catalonia, which has somewhat taken the place of wine. White wine is rather untypical for Catalonia, but is also often consumed. The most famous wine region is Penedès, where grapes have been grown from 4th Century BC. Just around the mountain monastery of Montserrat, the Priorat wine region is located, which produces mainly red wines.
Just as well known as the wines from Penedès is Cava, the Catalonian sparkling wine. As an aperitif a sherry is often enough.
If a Catalonian wants to avoid alcohol, he usually drinks still water.

Tapas are now an integral part of the Barcelona lifestyle. Here you will find lots of delicious tapas recipes and facts about the tapas culture. 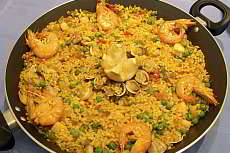 Catalan paella- More than a stew

The paella (pan) is more than a simple one-pot meal for farmers and fishermen. It may even be a culinary work of art. 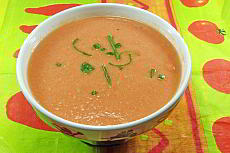 Lots of vegetables, which in this soup are not cooked. This way the gazpacho proves a culinary delight. 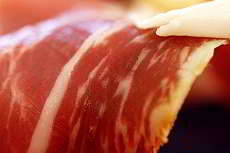 Serrano ham with tomato and bread - The on-the-go snack

Extremely easy and fast to prepare, ideal for in between meals or as a tapa. 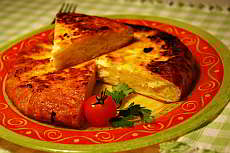 The tortilla de Patatas (potato omelette) is prepared quickly and easily. Nevertheless, it is very tasty and can be eaten either hot or cold.

Churros are available to buy at every corner stand. They are usually very oily, but delicious to enjoy. 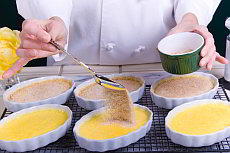 You can very easily become addicted to this really typical Catalonian dessert! 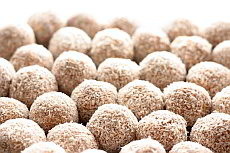 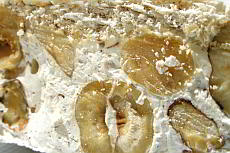 Turron come in different variations and can be bought at almost every corner in Barcelona. It is always well received as a souvenir for back home: very sweet but very tasty! 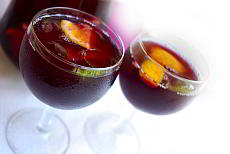 El Llibre de Sent Soví
If you would like to know what the Catalonian kitchen is and where it comes from you have to look at the origin: the first European cookbook "El Llibre de Sent Soví" came out in 1324 with Catalonian recipes. The unknown author especially emphasized the meaning of the flavours and scents in the recipes. The in the book Sent Soví presented recipes find their origin especially in the Moorish-Andalusian dishes.

In the 14th and 15th century the food from the book Sent Soví was spread over the whole Iberian peninsula.

El Llibre de Coch (the cookbook) from Robert de Nola
This cookbook from 1490 (published in 1520) characterizes the Catalonian kitchen the most. The book explains in over 200 recipes, how to cut meat, how beverages are supposed to be served and how to prepare fish from the Mediterranean. It is the very first printed cookbook.

Until the 17th century both cookbooks were the only cookbooks in Europe. Many recipes seem astonishingly modern today, for example "Eggplants in the Crock", although today less herbs are used.