Estrella Damm has a history of more than 140 years, which began with the Alsatian master brewer August Kuentzmann Damm in 1876. Estrella Damm developed into the best-known Spanish beer brand.

You can visit both production sites: the Old Brewery and the El Prat Brewery. A beer tasting is of course always included. 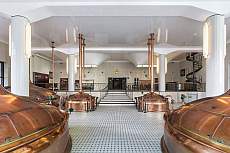 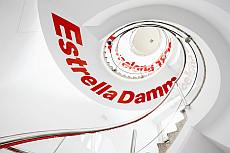 
You can still visit the historic Old Brewery and experience how history and the art of brewing began in the 19th century. You will see, among other things, the typical boilers for brewing beer, the power generator room and the historical archive. Of course you will learn a lot about the production of beer and can try it afterwards.

Did you know that "Estrella Damm", a Pilsner beer, is still brewed according to August Damm's original recipe? You can find out all this and much more on a brewery tour in the El Prat brewery. The beer is brewed here in the same way as in the old brewery, only in stainless steel fermentation kettles instead of copper. Of course, the production of beer has also developed here, which you will see impressively in the bottling plant. Of course, there is also a beer tasting at the end.

Please note that the tours are only available to people over the age of 18.

Worth knowing about Estrella Damm

In 1872, August Künzmann Damm from Alsace emigrated to Spain with his wife and founded his own brewery in Barcelona in 1876. He created a very light beer, adapted to the Mediterranean climate and food. The popularity soon spread to all of Spain. Estrella Damm is the best-known Spanish beer brand today.

One of Estrella Damm's newest and most successful beer creations is the Inedit brand, which was founded in 2008 in collaboration between the Damm master brewers, star chef Ferran Adrià and the elBulli sommelier team. Inedit, made from barley malt and wheat, is refined with spices such as orange peel, liquorice and coriander. It was created for upscale gastronomy and is drunk from white wine glasses.

For all friends of the purity law: it actually tastes delicious - if you like it.

Why a visit to the Estrella Damm brewery is worthwhile

With the two breweries you can get to know both the historical and the highly modern art of beer brewing, even if the new brewery is committed to the tradition of Damm. During a visit to the breweries in El Prat de Llobregat and the Old Brewery Damm you can get to know the entire production process and the successful history of the company. You will get special insights into the secrets that make Estrella Damm a particularly popular beer. Of course, there is no shortage of enjoyment either: the tasting of four or six types of beer is included!