Look behind the scenes of the gaming operations of the FC Barcelona. Here you can book tickets for the admission to Europe's largest football stadium, the Camp Nou. No standing in line at the box office, you can go inside whenever you like.

The Camp Nou is FC Barcelona's home stadium. The stadium was inaugurated in September 1957. Read about the history of the stadium.

The Camp Nou Tour leads you behind the scenes of the FC Barcelona and the gaming operation in this breath taking stadium.

Highlights of the Camp Nou Tour

Audio guide in the following languages

Latest entry: one hour before the stadium closes

Period of use: Flexible Tickets

With the flexible tickets you have free time for entry (during the whole opening time), you do not have to commit to a time beforehand. Please note the following restrictions:

Our tip: in the afternoon from about 15:00 it is much quieter in the stadium.

Closed on the following days

How do I get my ticket?
Booking Information
Cancellation

The Camp Nou is the largest stadium in Europe and the dimensions are impressive. Here you can see behind the scenes of the game operation of one of the most famous clubs worldwide. What does it look like in a press booth or in the crew cabin? How does it feel like a player walking through the tunnel onto the grass? What fascinates millions of people in Barça? Here you can find out. The museum is included in the price.

Within the "Camp Nou Tour", you can experience a panoramic view of the entire stadium from the press box. See the dressing room and visit the chapel, as some players do before the game. Experience the walk through the player tunnel to the sanctuary of the stadium: the lawn.
You'll see the press room, where coaches and executives hold the press conferences, and the mixed zone, where Messi and Co. give interviews on the field after the match.
You will then see documentaries on FC Barcelona in the Multi Media Zone. In the museum the exciting history of the club is shown and important trophies can be seen in the original.

Do you want to be there live when Messi & Co. are in top form? No problem: with the booking option "Barça Virtual Experience" you can experience the atmosphere at Camp Nou during a home game. Put on VR glasses and feel like a stadium visitor who is very close to the players on the field, during a 5-minute film.

The Barça Virtual Experience is included in the Camp Nou Tour Plus.

On November 17, 1982, Pope John Paul II visited Camp Nou and preached in front of 120,000 believers. He has since been a member of FC Barcelona.

High Security at the Stadium During Homegames of the FC Barcelona

Camp Nou has received the 5-star award from UEFA. This requires certain security measures in the stadium. For example, the stadium is monitored with cameras, escape routes are sufficiently available and accessible, security and police ensure that there is no riots in the stadium or well-known hooligans do not even get inside of the stadium. That's how it is in Central Europe as well: in the league stadiums there is quite high security. Rioting or beating in between the "fan groups" is extremely rare in the stadium. The vast majority of visitors "only" want to see a football match. So it is not a problem at all to go to a game in the stadium with children.

Overall, the problem of violent hooligans in Spain is much smaller than in many other countries. For security aspects, there is no reason not to attend a match of FC Barcelona.

On 22 September 2007, the draft for a stadium expansion was presented to the public. The contract for the planning of the stadium renovation was awarded to the renowned architecture firm Norman Foster.

However the plans to expand the stadium were put on hold due to high debts of FC Barcelona. Smaller projects, such as the new construction of the basketball stadium, were supposed to be realized first.

The Camp Nou - although legendary and extremely impressive - is quite old and is therefore supposed to be rebuilt according to the intention of the club presidium. After the financing was cleared, more than 70% of the voting members decided for the 600 million Euro project in a referendum on April 5th, 2014.

The aim of the new building plans "Nou Espai Barça" is to give the stadium a distinctive face that is unmistakably connected to FC Barcelona. But not only the Camp Nou is going to be rebuilt, also the indoor sports such as basketball will receive a new Palau Blaugrana with 12,000 seats, the ice hockey team a new ice rink, the museum its own building, the administration a new office building, the guests an underground garage with 5,000 parking spots and the visitors of a game are expected to have a much more comfortable interior: they want to set up new VIP areas and improve overall logistics within the stadium. On top of that barriers for persons with disabilities will be removed.

And most importantly, the stadium will be the largest pure football stadium in the world with 105,000 seats.

The facade can be illuminated in the club colors blue-red, the lighting effects adapt to the time of day and the event. Even modernist elements can be seen in the stadium.

The Reconstruction of Nou Espai and the Stadium

Construction will start in 2018 and should last until 2022. Since the current game operation is of course not to be interrupted, the new construction of the sports complex is done in several stages: First, the Mini Estadi, the second-team stadium in another place outside is reconstructed. The new Palau Blaugrana will replace it. After the demolition of the old sports palace, the underground car park will be built in the immediate vicinity of Camp Nou.
Afterwards the museum and the supporting structures for the facades of the stadium will be built. The next step is the new interior of the Camp Nou and the new upper tier of the main grandstand. When the new stands are erected, first the facade and then the roof is attached. Finally, outbuildings such as the administration building are reconstructed.

Overall, the redesign of the area should cost € 600 million. Camp Nou is by far the biggest contributor with € 420 million. The new Palau Blaugrana costs € 90 million, the parking lots and infrastructure € 40 million, land purchases € 30 million and the new mini-stadium € 20 million. 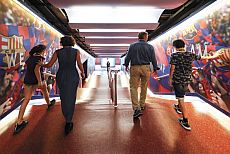 Enter the number of tickets. They will be sent by e-mail.

Here you can book your private guided tour in Camp Nou 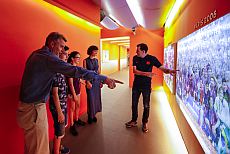 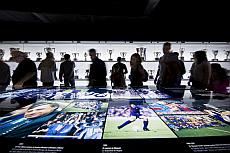 Please indicate the desired number of tickets (at least 10 people).

Product not available/Sold out

Advice for the visit of the Camp Nou


For the tour, we recommend to plan about 1.5 hours. By Bus Turístic stops outside the entrance to the stadium.
Our online ticket prices for the Camp Nou Experience are already discounted.

On Barcelona.de you can book tickets for games of FC Barcelona.

Training of the team
The practice takes place daily, in the morning and afternoon. The two practice fields are the Mini Estadi, at least 16,000 spectators are able to watch, or on the training ground "La Mesía" close to the Camp Nou. The small stadium is often open to the public. The times will be announced in the sports newspaper "Sport" and "Mundo Deportivo".