You are here: barcelona.de > Excursions > Montserrat

Even from a distance, the 1,236 meter high mountain offers a magnificent sight. You can also experience the distant view far into the hinterland of Catalonia from above.

The mountain Montserrat with the Benedictine Monastery Santa Maria de Montserrat is located about 45 km northwest of Barcelona. Book various excursions to Montserrat.

From Plaça Espanya train station, the FGC (Ferrocarrils de la Generalitat) train line R5 (Barcelona Manresa) leaves every hour starting at 8:26 am. The drive to Montserrat takes about 1.5 hours. A first highlight of the journey is the onward journey with the cable car (Aeri de Montserrat) or the rack railway (Cremallera de Montserrat) up to the monastery of Montserrat.
You can find the timetable for line R5 here. 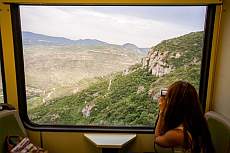 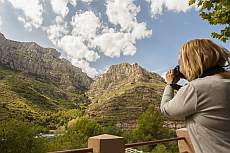 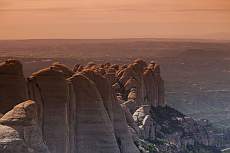 Anyone arriving by car or motorbike will truly enjoy one of the most beautiful serpentine roads in Spain.

It is easy to get there: A2 motorway, Martorell exit, then take the N II national road to the Montserrat junction. Approximately 70 km to drive from the center of Barcelona. You can already see the peculiar shape of the mountain from the highway. Montserrat means "sawed mountain".

Excursions to the monastery and natural park of Montserrat

In addition to the Tot- and Trans-Montserrat tickets for your own arrival and many extra services, you can also have a good time: book a private or open excursion and experience a beautiful day in a wonderful setting. 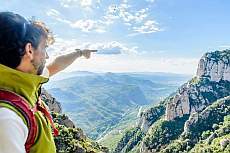 Here we present several private excursions to Montserrat Monastery and Natural Park. The tour guides are exclusively for your group. 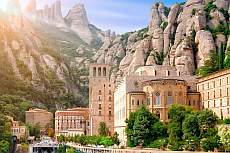 In the open excursions to Montserrat you are together with other travelers. Here we show you several very nice tours to the monastery mountain and the surrounding area.

From the monastery itself it is about 300 meters to the summit of Montserrat. A cog railway runs almost to the summit. From there you can hike several well-developed and signposted hiking trails through the Montserrat Nature Park. Several hiking trails of different lengths lead from the top station of the funicular to the abandoned hermitages. In any case, you will be rewarded for the effort of the hikes with an overwhelming view of Catalonia.
Although the paths are well developed, you should definitely wear sturdy shoes. A medium level of fitness is sufficient to master the paths. Please do not leave the hiking trails to protect the sensitive and sparse vegetation!

The massif is in the middle of a very beautiful nature park. Even the journey by car or motorcycle over well-developed and winding serpentines is a foretaste of what awaits you on the summit of Montserrat.

Arriving at Montserrat Monastery, you have an indescribable view all the way to Barcelona. However, the view of the city itself is not possible because of the Conserolla Mountains.

The monastery of Montserrat itself is not a special attraction from an architectural point of view, the scenery into which the walls were built is inspiring. Many of the tourists come just for the statue of the Black Madonna, patron saint of Catalonia. The 12th-century figure is enthroned above the high altar in the monastery's basilica. In her honor, around 50 choirboys of the "Escolania de Montserrat" of the monastery's boarding school sing church songs - Salve Regina and Virolai - every day (Monday to Saturday at 13.00 by the boys' choir of the monastery school, Sundays and public holidays at 12.00).

In the Montserrat Monastery Museum you can see works by important artists such as Dalí, El Greco, Monet and Giordano. You will also find archaeological and liturgical exhibits.

In the lower part of the monastery area there is a restaurant where you can eat and drink quite cheaply.

The Escolania is the oldest music school in Europe. The choir was first mentioned in a document in 1307. About 40-50 students from 9 to 14 years go to the school. They can also spend the night there and also spend their free time there. But it's not a boarding school.

More about the Escoliana de Montserrat

The parents of the choirboys pay 20% of the school fees, a large part of which is covered by the Catalan Ministry of Education. A foundation pays the rest. If parents are unable to pay their share of the school fees, the "Fundació Abadia de Montserrat 2025" will also take care of this.

In addition to singing, the students learn piano and another instrument of their choice.

Montserrat Mountain has had religious significance since pre-Christian times. Before Christ a temple was built here by the Romans to worship Venus. In the first documentary mention of 888, the construction of a first monastery around 880 AD was reported. It was hermit monks who had built various hermitages on Montserrat. The monastery was then founded by expanding the hermitage of Santa Maria in 1025.
Miracles are attributed to the Black Madonna found in the 12th century, which is still the destination of pilgrimages today. The monastery owed its strong growth to these ascribed miracles.

The basilica of the monastery was built in the 16th century, in the transition period between Gothic and Renaissance. The Black Madonna is kept in the basilica.
Many famous people made pilgrimages to Montserrat: Pope Benedict XIII, Columbus, Cervantes, von Humboldt, Kings Fernando and Isabella, Carlos I, Felipe II and Louis XIV.
On his second voyage in 1493, Columbus named an Antilles island Montserrat.
In 1811 the monastery was largely destroyed by Napoleonic troops. The Benedictine monastery was rebuilt.

The monastery resisted during the Franco dictatorship. Despite the ban, Catalan was still spoken there and masses were held in Catalan. Hundreds of people persecuted by the Franco regime were hidden here. More than 20 monks were executed because of it.
Today, this resistance makes the monastery an important symbol of Catalan self-evidence and the fight against oppression. The Catalans are still grateful for that today.

Transfers from Barcelona to Montserrat