You are here: barcelona.de > Going out > Concerts, Theatre, Movie > Theatres

Barcelona's theatres at a glance

Barcelona's theatre scene has flourished greatly in recent years. Major world-famous plays and musicals are preformed here. Moreover, a theatre scene with popular plays, a wide variety of performances for the general public and alternative theatres have become established over the years. The theatre scene these days is very impressive; with audiovisual shows and performances by regional and international artists and ensembles.

Theatre is an integral part of Barcelona’s cultural calendar, and enjoys a very good reputation with both locals and visitors. In many theatre houses modern pieces are performed, as well as classical pieces in Catalan. But you can also visit numerous performances in Spanish, English or other languages.

This theatre is, after the Paris Opera, the second largest opera house in Europe. The Liceu was rebuilt completely restored to its original state after a fire in 1994, re-opening in 1999. Outside of rehearsals and performances, you can take a tour of the Gran Teatre del Liceu building. 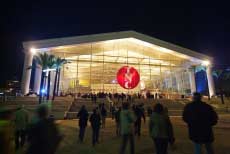 In the Catalan National Theatre – which opened on Catalonia’s National Holiday, 11th September 1997 – mainly Catalan as well as international productions are presented in three halls. The house sees itself as a promoter of contemporary culture; creativity is the "backbone of all activities". The TNC is one of the great cultural centres in Barcelona. The monumental building has the shape of a pantheon with an impressive gabled roof. The main building of the theatre has two halls (Large and Small Hall), a huge foyer and a third theatre in the adjacent building. 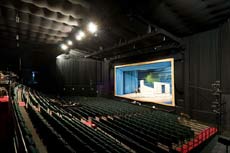 The Sports Palace of the 1955 Mediterranean Games was converted into a theatre for large format theatre and musicals, opening in 2001. Here you will find a varied theatre and musical program, including hits like Mama Mia and Catherine Johnson. The musical school of Barcelona has their rehearsal and practice rooms here.

The hall can accommodate 2,800 visitors, and the stage is about 20 feet wide. 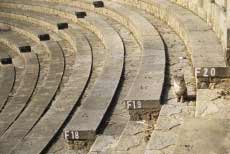 The Teatre Grec outdoor theatre, the Greek Theatre, is located in a former quarry near the Ciutat del Teatre. This Greek-style theatre was opened for the 1929 World Fair. From June to August, the amphitheatre is mostly the venue for performances of "Grec" theatre and music festivals.

Teatre Lliure in the Theatre Town in the Ciutat del Teatre

The Theatre Lluire has been a founding member of the Union of the Theatres of Europe since 1989. The Lluire is one of the most prestigious theatres in Catalonia. The theatre, which was founded in 1976, had its first hall in the Gràcia district. In 2001 it moved to new premises in the former Palace of Agriculture for the 1929 World Exhibition in the Ciutat del Teatre - the city theatre. The two halls are equipped with the very latest technology. 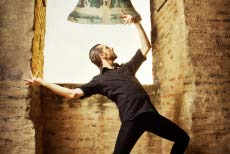 The City Theatre and Center for the Arts was established in 1985, moving its facilities to the former flower market Mercat de les Flors in 2007. It specialises mainly in dance. The theatre has three halls (with 664, 320 and 80 seats respectively). 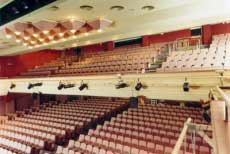 After re-opening the repertoire performed here was modernised. International theatrical works and world famous musicals are shown here. Apolo is one of the most prestigious houses in Barcelona. 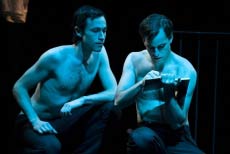 The Sala Beckett is a small theatre in Barcelona, which is dedicated to experimental theatre. Since 1989 the theatre has provided space for young writers, and specifically promotes contemporary drama. Sala Beckett also provides courses for new dramatists. 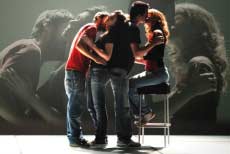 The Teatro Club Capitol was the first commercial theatre in Barcelona where two performances can take place simultaneously on two stages. The theatre has two halls with around 520 and 270 seats respectively. It is not too large, but this means that it has a cozy atmosphere. The theatre benefits from its central location right on the Rambla.

The repertoire consists of comedy, cabaret, musical performances and much more. 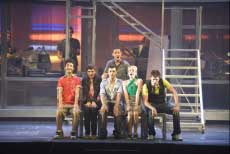 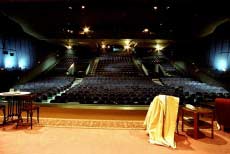 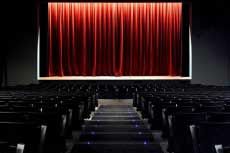 This theatre, which opened for the first time in 1914, was closed for economic reasons in 2004. But with the disappearance of this great theatre, a large gap was left in the theatrical landscape. The theatre group "Grup Focus", which operates several theatres in Barcelona and other cities, took over the Goya, modernized it with the help of government subsidies and opened it in October 2008. Today mainly modern, contemporary and domestic productions are performed here, many of them in Catalan. 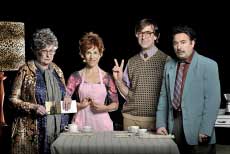 The Sala Muntaner, one of the newest theatres in Barcelona, is part of the alternative theatre scene. It provides a variety of performance art performances. This theatre is primarily popular for its amusing performances on Friday and Saturday nights. 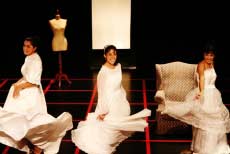 The history of this theatre began with a 75 seats hall in the street “Tantarantana”. With the move to its present home in Les Flor, 22, the theatre has doubled its capacity.

Performances here are mainly modern, dramatic pieces without costly stage production in Catalan, "Pocket Opera" on the small stage and plays for children.

The Poliorama theatre was founded in 1906 as a cinema. Only later it was converted into a theatre in which mainly comedies were performed. Between 1937 and 1939 it was closed. It has a mixed program, but still has many comedies. The theatre has three halls with seating for 705, 495 and 210 people respectively. 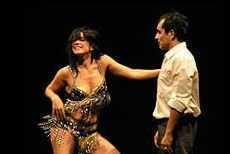 The Teatre del Raval is a small program theatre, which adheres to artistic quality. The team here also conducts theatre research; modern techniques in all categories of the performing arts are tried out and studied. The pieces are in Spanish and the program includes plays for adults and children. The theatre has evolved from a community centre in an old monastery. The building was constructed in the romantic style of the Italian architect Josep Maria Pericas, a student of Gaudí.

The Teatre Romea was established in 1863 as a private theatre for an audience of the lower middle class and working class. In 1981 it was declared “Centro Dramático” by the Generalitat de Catalunya - the Catalan government - and fulfilled the role of National Theatre of Catalonia until the founding of the Catalan National Theatre (TNT) in 1997. The ledaershipt was taken over by "Grup Focus". 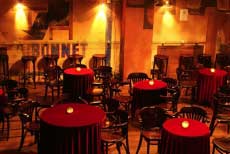 The Teatreneu with its three halls, the largest of which can accommodate up to 360 people, is one of the smaller theatres in Barcelona. In Tetreneu about 30 performances per week are performed, featuring a varied program of musicals, comedy, improvisation, cabaret, dance, acrobatics, and more. Prices here are affordable for everyone. Of particular note is the ambience of the Cafè Teatre hall and the Sala del Mig, in which viewers can enjoy theatre while sitting in a café. It is well worth a visit. 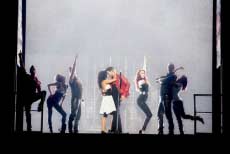 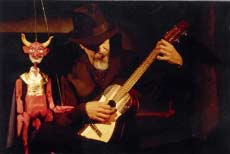 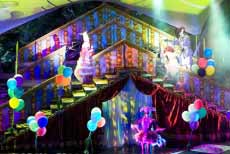 Teatre Victòria is one of the most popular theatres in Barcelona. Since the privatisation of the theatre it has been equipped with modern infrastructure, the latest technology and a team of theatre experts. Here performances include modern music and plays, reinterpretations of classics, comedy, or even hip-hop shows and the Opera Show. 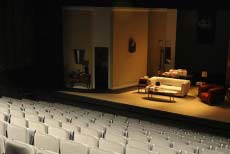 In order to provide a theatre for the working class, the Villarroel was founded in 1972. Since 2005 it has been managed by "Grup Focus". The focus of the theatre is mainly on contemporary drama, mostly in Catalan by Catalan authors.

Theatres in Barcelona on the road map

Here we show you the theatres of Barcelona on a road map.

La Ciutat del Teatre
One of the main venues for the performing arts in Barcelona. The Ciutat del Teatre, the theatre town, at the foot of Montjuïc, holds many of the leading productions of the city within its imaginative spaces. Among others here, the Mercat de les Flors is home to the Municipal Theatre, which focuses mainly on dance. Likewise, the complex also includes the permanent seat of the Teatre Lliure, one of most famous performing arts ensembles in the world. The Lluire is housed in the former Palace of Agriculture for the 1929 World Fair. Next, visit the site of the BTM (Barcelona Teatre Musical), the acting school for actors and directors and other cultural institutions. About 200 metres from the Ciutat del Teatre you can find Teatre Grec, a Greek-style amphitheatre.

Actual Theatre Scene
For a long time theatre in Barcelona was in the shadow of the Madrid theatre world. Barcelona had to close several theatres, as the repertoire represented mainly old classics and offered little variety. The public were attracted to cinemas rather than theatres. Several theatres were therefore converted into cinemas.

In the 1980s a wave of renewal began. Theatres were newly opened or reopened. This trend continued into the 2000s. Two initial highlights included the opening of the Catalan National Theatre (TNC) in 1997 and the new construction of the Gran Teatre del Liceu Opera in 1999. In association with the renewal, theatre companies were formed, adopting modernised technology and content. The best-known companies are the "Grup Focus", "tricicle (3xtr3s)" and the "Grup Balaña", which also operates some cinemas.