Characteristic Charm and Many Attractions

The word Raval comes from the Arabic word Rabad, which means neighborhood or district. The old town, whose character is strongly influenced by immigrants, is located in the west of the Ramblas and extends to the Mercat de Sant Antoni. Fortunately, and rightly, the district was able to drop its bad reputation, which it had mainly because of its lower district - formerly called Barri Xino. Today, Raval is a district with characteristic charm, shopping zones, numerous sights and many opportunities to go out. Here you can book a private guided walking tour through the district Raval in English.

On satelite recording you can see the Raval immediately: it stands out sharply from its neighboring districts. To the west, the raval is separated from the checkered Eixample by the Ronda de Sant Antoni and the Ronda de Sant Pau. The most striking point here is the Mercat de Sant Antoni, a beautiful historic market hall from the Modernist era. However, the cross-shaped steel frame of the hall is being renovated at the moment. To the north, the connecting road between Plaça Catalunya and Plaça de la Universitat forms the border, while to the east the broad Rambla can clearly be seen as a border road.

A cornerstone of the district in the south are the Drassanes, a medieval shipyard, where today the worth seeing Museu Maritim is housed.

History of the Raval

At the time of the Middle Ages, the district of today's Raval was mainly used for agriculture. Gradually, the space within the city walls was no longer sufficient, so that the further settlement took place outside the city walls.

With the beginning of the war of the Crown of Aragón against Castile in 1356, the city walls of Barcelona have been expanded and the present Raval was included in the protection of the city fortifications.
The previous western city boundary was today's Rambla. For the time being, mainly hospitals, churches and monasteries were built in the Raval. Later, charity facilities were added.

Until the 15th century, the Raval was known as the "District of the Monasteries". During the riots of Barcelona in 1835, which were mainly directed against the church, many of these monasteries were looted and burned down.

With the beginning of the industrial revolution in the 19th century, the district was characterized mainly by a massive overpopulation - the character of the district changed rapidly. Industrial plants spread in and around the district. The workers usually lived right next to the factories, which led to an increase in the district's population density. The Raval is developing into the most densely populated area of Europe.

In addition to the increase in population due to the labor demand of the factories, many war veterans and unemployed moved into the already crowded Raval after the Spanish-American War in 1900. Once again there were riots and in the summer of 1909 the "tragic week" of Barcelona, the bloody confrontation between the working class and the Spanish army began. The clashes were triggered by the convening of reservists to strengthen the Spanish colonial forces in Morocco.
In 1850 the demolition of the city walls began and the district opened up to the surrounding neighborhoods. To this day, the Raval has retained its very own character and the former boundaries between the neighborhoods are unmistakable.

Barri Xino and the Urban Development since 1990

The nickname "Barri Xino" was given to Raval at the beginning of the 20th century, when a journalist compared the neighborhood to the Chinatowns in America's big cities. Narrow streets, poor hygienic conditions and dense population prevailed similar conditions here. However, there was no significant number of Asians, unlike China Town in New York.
For a long time, the part near the harbor was dominated by taverns and brothels. The neighborhood was known as the neighborhood of the poor. Only with the modernization measures in the mid-1980s, the district was able to get rid of this reputation. As part of the preparations for the Olympic Games, which took place in Barcelona in 1992, the decision was made to completely renovate the neighborhood near the port.

The modernization measures continued even after the Olympic Games. It has created some of the landmarks of the Raval, such as the "green lung of the district", the Rambla del Raval or the Museum of Contemporary Art (MACBA).

Today, the Raval is one of the most popular nightlife areas and has become an important meeting place of the art and music scene and a cultural center in Barcelona. Especially in the evening, the streets and squares fill up and are lively until late in the evening.

The Raval is a multicultural district. Various cultures meet here, you can easily notice it at the shops and restaurants from all over the world. On the streets you can hear different languages.

An important meeting point of the skaters scene is the forecourt of the contemporary MACBA Museum. The Rambla del Raval invites you for a walk. Also note the many grafiti and other street art decorating the walls. Some street art works have been created by artists world-renowned in the scene and are partially under the protection of the city.

In the meantime, some hotels of high standards such as the Barceló Raval have been established and various institutions have settled here. Modern residential buildings were created, without destroying the grown structures. As a result the Raval has become a mix of quaint, old bars, cultural facilities and unique shops that are worth seeing.

As part of the urban development since the 1990s, many institutions and museums have found their home in the district Raval and historic buildings have been extensively renovated. If you like something more simple and down-to-earth, you can go out well in the evening. 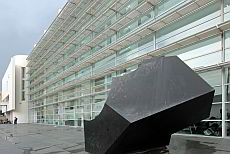 With its sleek white lines, the Museum of Contemporary Art is the attraction of the El Raval district.

Barcelona's famous opera house Gran Teatre del Liceu was reopened in 1999 after a fire has destroyed the building. The house is provided with latest technology and it is rebuilt at its original location at the Rambla. In the morning you can participate in guided tours, during which you can also see the impressive backstage areas. 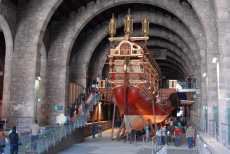 The Museu Marítim shows the navigation of the Mediterranean since the Middle Ages, when Barcelona was one of the great seafaring nations. In the museum at the southernmost corner of the Raval you can visit a true replica of a rowing galley. 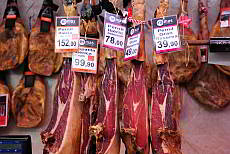 The Mercat de la Boqueria (Mercat de Sant Josep) is the most famous, beautiful and largest market hall in Barcelona. The market excites all the senses. No other tourist attraction is integrated as much in the local everyday life. 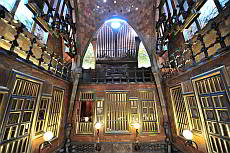 One of Antoni Gaudí's finest masterpieces, reminiscent of a Venetian palace. Palau Güell is located in the Raval district, just a few metres from the Rambla. 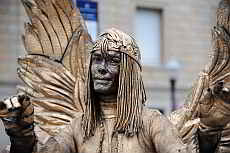 The Rambla separates the Barri Gòtic and Raval districts. It forms the eastern border of Raval. To the left and right you can see two very different districts, Raval and Barri Gòtic. The Rambla itselve is the most famous boulevard in Barcelona.

Tips for Visiting the Raval

The Reputation of the Barri Xino
This was the name of the previously disreputable lower part of the Raval. Unfortunately, his bad reputation persists. Wrongly, people often warn against even getting near this part of the neighborhood. Today the zones you should avoid are far out on the outskirts. You can visit the neighborhood today without being worried. Simple security measures, such as not using open handbags, are sufficient.

Contrast Raval and Barri Gòtic
The two old town districts are very contradictory: today's Raval is very much influenced by immigrants from all over the world. Butcheries without pork, telephone shops, simple bars and restaurants are often to be found here. In the Gothic district with its narrow and winding streets you will find boutiques, many shops selling sweets, typical Catalan restaurants and tapas bars.
In the two districts you will experience very different cultures.

Book your tickets here without queuing. You can save a lot of time.

Book tickets for the zoo here and receive the online discount on the ticket price.