Gaudí embodies this structure with the legend of St. George

Casa Batlló is one of the most interesting and fascinating buildings in Barcelona. The work of Antoni Gaudí can be seen in every detail of the building.

When designing, he oriented himself very closely to nature and the legend of Saint George, the patron saint of Catalonia. The organic and playful shapes make visitors feel as if they are in a light-flooded, colorful fairytale house. Let yourself be enchanted by this masterpiece of modernisme.

Tickets for the admission to Casa Batlló

You can choose what you want to see in Casa Batlló - or maybe just everything: the Beletage, an architectural splendor around 1900, where the family of the master of the house lived. The Gaudí Dome, a "wave of Gaudí's inspiration: of nature". Exciting audio guide accompanied by the music of the composer Dani Howard or the virtual reality tablet: immerse yourself in the magic of Gaudí.
From the legendary roof terrace you have a unique view of Barcelona. In the belly of the dragon - the roof truss - Gaudí masterfully knew how to evoke the "memories of nature". New since 2019 is the access to the basement, designed by the Japanese architect Kengo Kuma. 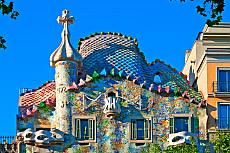 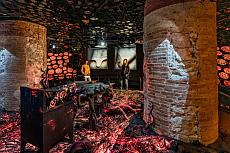 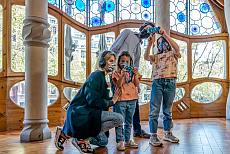 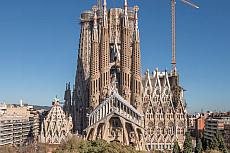 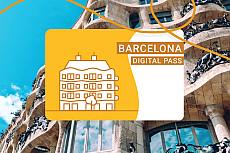 
The construction of the building

A return to natural elements and forms is very typical of Modernisme, Catalan Art Nouveau. The gently curved balconies of Casa Batlló are reminiscent of the waves of the sea. The entire facade is also covered with flowers.

Casa Batlló is a conversion of an existing building. It was completely modified in 1904-1906 by order of the industrialist Josep Batlló. Especially in the lower part, the Beletage, Gaudí's handwriting is very clear. Shaped like bones from the outside, reminiscent of a forest from the inside, the pillars of the facade make an important contribution to the shape of the building.

As is typical for Gaudí, he took his inspiration from nature when designing the house. Inside, curved and organic shapes dominate the walls, ceilings and furnishings. The forms on the first floor of the residential building are reminiscent of plants and caves, the balcony parapets of skull bones. The chimneys on the roof do not serve as chimneys, but are part of a sophisticated ventilation system that keeps the house nice and cool even in summer without the need for air conditioning.

The roof of Casa Batlló - the dragon's back

Shaped like the fearsome dragon's back, Casa Battló's roof is covered with large, shiny scales. It is made up of tiles on double mansards adapted to the organic architecture.

On the left the roof is delimited by a tower with a four-armed cross. With a bit of imagination you can spot the lance of Sant Jordi stuck in the monster's back. Behind it are plastically formed ventilation shafts and chimneys, which are reminiscent of the guards of the house. In the window openings you can see pillars imitating the shapes of bones.

The roof area, as the upper end of the building, has always had a special significance for Gaudí. The roofscape of Casa Batlló offers you a great view over the city and is decorated with countless small details. For example, if you look from the terrace through the hole in the left part of the curved roof, you have a direct line of sight to the Sagrada Familia. Gaudí was already working on his masterpiece at the time of the renovation work.

With all the interpretations of the details of Casa Batlló, one should keep in mind: Antoni Gaudí himself never explained the house. So everyone is entitled to let their imagination run wild and come up with their own story.

Location and surroundings of Casa Batlló

Casa Batlló is located on one of the main axes of Modernisme. From about 1850 the demolition of the city walls of the Ciutat Vella began and a new modern district, the Eixample, was created. Passeig de Gràcia, which divides the district in two, became a promenade and the scene of the most magnificent architecture of the time.

The block of houses around Casa Batlló is also called the "Illa de la Discòrdia", in English "Island of Discord". At this point, the most important architects of Modernisme realized themselves and tried to trump each other. The result was a wide variety of buildings, which now form an ensemble on this house front.

Directly to the left of Casa Batlló is Casa Amatlló, also a splendid example of Modernisme. The building was designed by the Catalan architect Josep Puig i Cadafalch. With its clear facade inspired by the neo-Gothic style, it stands in clear contrast to Casa Batlló.

A little further down the street, on the corner of the block of flats, is Casa Lleó. This house was designed by the founder of modernism, Lluís Domènech i Montaner. It shows the mixture of different styles, inside and out.

There are many stories and legends about Saint George or Sant Jordi, as he is called in Catalan. The best-known is about a terrible dragon that terrifies a small village. In order to appease the monster, the villagers must regularly offer him a human sacrifice, which is determined by lot.

Barcelona's most famous modernist architect, Antoni Gaudí, created Casa Batlló. It has been on the UNESCO World Heritage List since 2005.

One day the lot falls on the king's daughter. This is led to the gates of the city and waits there to be devoured by the dragon. At that moment, Sant Jordi appears, confronts the dragon and defeats it. With his lance in the form of a cross, he deals the deathblow to the dragon and thus saves the princess. Red roses grow in the very spot where the ground is soaked in the dragon's blood. Incidentally, this is also the origin of a tradition according to which women in Catalonia are given red roses on the day of Saint George - April 23rd.

Sant Jordi is the patron saint of Catalonia, so dragons have always played an important role in Gaudí.

The Casa Batlló in new splendor

In 2018 and 2019, Casa Milà was extensively restored - not an easy task, since five different materials with different requirements had to be processed: glass, ceramics, stone, wood and iron.

Visitors could watch the restoration team at work and ask questions. Much of the interior has been restored to its original state. Inside, the original interior panels were discovered, which were uncovered and restored.

The facade now shines in new splendour. More than 30 people with 7 different professions worked here to faithfully restore damaged parts from the Trencadis mosaic. Parts made of glass, ceramics, iron, wood and stone have been cleaned and partially renewed.

Visitors were able to view the work in transparent tunnels, and a skywalk on the roof offered a glimpse of the façade restorations at a dizzy height.

Information about the restoration work in Casa Batlló

Why a visit to Casa Batlló is worthwhile

Casa Batlló is one of the last houses Gaudí remodeled before devoting himself entirely to the construction of the Sagrada Familia.

In hardly any other building are the forms as organic and playful as in Casa Batlló. That makes the house unique. In 2005 it was included in the UNESCO World Heritage List.

The interior tour of Casa Batlló is particularly recommended. Here you can immerse yourself in the world of Gaudí and discover numerous fascinating details of the building from the ground floor to the impressive roof terrace. Many allusions and stories only become apparent after repeated viewing. For many, the house is one of the most beautiful sights in Barcelona.