The Casa Amatller is the first of the three buildings of the "Manzana de la Discordia", Barcelona's apple of discord. Josep Puig i Cadafalch, one of the most important architects of Modernisme, designed the house.

The Amatller family is one of the most important chocolate manufacturers during the modernist era. Even today, Amatller chocolate is still well known around the world.

The facade of the house is adorned with three essential elements that represent Amatller's main interests: in addition to antique glassware and photography, of course, above all chocolate.

The square gable with the serrated roof cornice represents a corner of a chocolate bar and is also inspired by typical 17th-century Dutch houses. 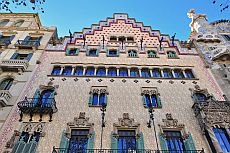 In 1900 the extravagant house at Passeig de Gracia, 41 was completed. Antoni Amatller and his daughter Teresa moved into the Belle Etage, the first floor then reserved for the wealthy owners of the house. His wife left the family and moved abroad when the daughter was seven years old.

Josep Puig i Cadafalch, one of the most-known architects of the modernism created the Casa Amatller.

The colorful glass elements on the gable and the finely cut glass of the windows, in which the sunlight reflects differently depending on the time of day and the weather, pay homage to Antoni Amatller's passion for collecting valuable glass vessels.

In order to accommodate the photo studio on the upper floor and to make use of the natural light, the walls and windows were raised, thereby violating the building regulations in force at the time. The artistic passion of the head of the house served Puig i Cadafalch as a welcome excuse.

Furthermore, you will find Saint George (Sant Jordi) right at the entrance, which should not be missing from any representative building in Barcelona. The house had all kinds of modern technical achievements, including a rotating garage; where the café and chocolate shop are located today.

The café also has seating on a spacious garden terrace, giving an indication of how large the property once was. The Casa Amatller had electric lights that could be converted to gas and an electric elevator for eating - and this at a time when only 5 percent of households in Barcelona had electricity.

The interior of Casa Amatller

In the Belle Etage hallway, there was a large sink at the back of the fireplace, so the water was automatically heated. By the fireplace is a sculpture of two women in a boat, symbolizing Europe and America. The wealth of the Amatllers was based on trading with America in cocoa beans.

The interior design, such as the furniture, tiles and floors made of fine wooden parquet or mosaic, was largely designed by Puig i Cadafalch. Puig i Cadafalch collaborated with the sculptors Eusebi Arnau and Alfons Jujol.

One motif is particularly common on the floors: the almond tree, which is what the name Amatller means when translated. In Moorish style, the walls are decorated with colorful tiles from Seville. The reception rooms faced the current courtyard, which used to be a lush garden.

The bedrooms face the street. Daughter Teresa's room has a richly decorated bay window, which was usually reserved for the lady of the house. After father and daughter Amatller, no one lived in the house. Before her death in the 1960s, Teresa Amatler set up a foundation to preserve the house for posterity.

Today you can see the original furniture and interior and part of Amatller's glass collection.

Manzana de la Discordia - the apple or block of discord

"Manzana" means block and apple. This is a reference to the competition of the three leading architects of Modernisme Antoni Gaudí, Lluís Domènech i Montaner and Josep Puig i Cadafalch in their quest to realize the large commissions of Barcelona's wealthiest and most distinguished citizens. Although the Casa Amatller, the Casa Batllò and the Casa Lleó Morera were all built around the same time around the turn of the century between 1898 and 1906, they differ significantly in their architecture.

While Gaudí implemented the Modernisme impulse most strongly and worked a lot with organic elements and rounded shapes, Puig i Cadafalch oriented himself even more to traditional styles from other countries with Gothic and Moorish elements. The most striking features of Lluís Domènech i Montaner's Casa Lleó Morera (Passeig de Gracia, 35) are the numerous columns, some of them pink, some rococo elements and the tempietto on the roof of the house. This makes it quite feminine and playful, but also less daring than Gaudí's experiments.

Although both the architects and posterity are still arguing about whether Casa Amatller, Casa Batllò or Casa Lleó Morera is the most beautiful building in Barcelona, ââall three artists Piug i Cadafalch, Antoní Gaudí and Domènech i Montaner saw each other united in being part of the Renaixenca that gave birth to Catalan Art Nouveau. Incidentally, like the other two houses, Casa Amatller was not newly built. Each building has been remodeled and refurbished according to the architect's offbeat style.

The customer for the Casa Amatller was the chocolate manufacturer Antoni Amatller, who expanded his grandfather's small chocolate factory into an important "empire" with the most modern cocoa processing machines from Switzerland. His advertising posters were designed by famous artists of his time, such as Ramon Casas. This is due to the fact that Antoni Amatller himself was very interested in art and foreign cultures. He owned a collection of antique glass vessels, traveled through Europe as well as to Morocco, Egypt and Turkey and was a passionate hobby photographer. He and his daughter were members of the Club d'Excursionistes de Barcelona, ââwhere they regularly gave travel lectures.

The Amatller family had been trading in cocoa beans since 1797 and made chocolate in their own factory. Amatller was born in Barcelona in 1851. He trained as a master chocolatier in Belgium and Switzerland. He died in 1910 and his daughter Teresa continued the business.

The restoration was very extensive: all floors, the roof and the facade were renovated from the ground up. In 2007 and 2008 the façade was restored and in June 2009 the Fundació Privada Institut Amatller d'Art Hispánic signed a contract with government agencies and another foundation for the further renovation of the building with a budget of almost €5 million. As part of the further renovation, space was created so that the Fundació Institut Amatller could set up its headquarters, the library and Amatller's photo archive on the second floor.

The renovation of the interior of Casa Amatller lasted from 2009 to 2014. In 2015, the first floor was converted into a museum and at the same time the house was opened to the public.

"Hoy como ayer - Chocolate Amatller" ("Today like yesterday - Chocolate Amatller") is the most common advertising slogan for the renowned Amatller chocolate, which has been produced in Barcelona since 1797. At that time, entire streets of Barcelona are said to have smelled of fine chocolate. The city's wealthy citizens preferred to have their "chocolate a la piedra" or "la cuita" - freshly grated hot chocolate - prepared right in their homes.

Antoni Amatller's passion for art and his connections led to Chocolate Amatller advertising posters being designed by important Modernist artists such as Rafael de Penagos, Ramon Casas and Alfons Mucha.

Even today, the chocolate is offered in tins in the Modernsime style. The chocolate Amatller can be found everywhere in Barcelona.

At the beginning of the 1970s, Chocolate Amatller was bought by Chocolates Simón Coll, also a well-known chocolate manufacturer and one of the few "Bean to Bar" manufacturers - everything from the cocoa bean to the finished chocolate bar is produced in-house.

Why visiting the Casa Amatller

Together with Casa Batlló and Casa Lleó Morera, Casa Amatller forms the so-called block of discord. The three buildings were designed by the most important modernist architects: Gaudí, Domènech i Montaner and Puig i Cadafalch. The buildings impressively show how different the three most important representatives of modernism were.

Casa Amatller has been open to the public since 2014 after an extensive and loving restoration. In addition to the house itself, the museum is also dedicated to the famous Chocolate Amatller. You can also taste the Amatller chocolate in the café. Traditionally, the drinking chocolate is served with toasted bread.

The house is simply beautiful and gives an insight into the life of "higher society" at the beginning of the 20th century.


When visiting Casa Amatller, we recommend having a chocolate in the cafeteria. You should plan about 1.5 hours for the visit.

Book tickets for Casa Milà here. No queuing at the ticket office.

Book your tickets here without queuing. You can save a lot of time.