The Santa Maria del Mar is one of the symbols of Barcelona and is considered by many to be the most beautiful Gothic church in the city.

Due to the very short construction time of only 55 years, the church was completed in a building-historical epoch. There was no mixture with other architectural styles. Here you can experience pure Gothic.

The building is located in the historic district of El Born, just a few steps from Via Leietana, which separates the Gothic Quarter from El Born. For all those interested in literature and history, we recommend the guided tour of the bestseller "The Cathedral of the Sea" (can be booked in English, Spanish or French).

'The Cathedral of the Sea' literary walking tour 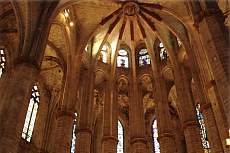 
The construction of the Santa Maria del Mar

The site of the Church of Santa Maria del Mar has been of particular importance since early Christian times. The apostle James is said to have preached here. Therefore, a small chapel was built here. In 304 the body of Saint Eulalia was buried there. The bones were hidden from the Moors in the 8th century and only found again 15 years later. In 1339 the bones were then transferred to the cathedral.

The foundation stone of today's Gothic church of Santa Maria del Mar was laid in 1329. With a construction period of only 55 years, the church is the only Gothic church that was actually completed within one epoch. As a result, no different architectural styles mixed up in the church.

The church was partially destroyed in 1714 during the War of the Spanish Succession. The damage was only provisionally repaired. In the Spanish Civil War in 1936, the patched areas broke down again in a fire. The fire largely destroyed the interior. Most of the church windows also had to be reconstructed. In 1990 the renovation and restoration work was completed.

The interior of the Santa Maria del Mar

The interior of the Santa Maria del Mar is particularly worth seeing. Entering the church from the Plaça de Santa Maria through the large portal, you will see a narrow nave that emphasizes the height and length of the basilica. The stained glass windows flood the room with subdued colored light.

Due to the special construction, the nave of the Santa Maria del Mar has only four narrow, octagonal pairs of pillars to support the loads of the 13 meter wide vault. Around the church there are small chapels that form a kind of cloister. The apse is surrounded by a delicate ring of pillars, which merges into a multi-part vault and thus forms the conclusion to the top.

The outside of the church

High columns divide the façade into three sections corresponding to the naves. The narrow octagonal towers, 33 meters high, end straight at the top. Going around the church, you come to the small Plaça del Fossar de les Moreres on Carrer Santa Maria, on which a granite slab commemorates the Spanish invasion of 1714.

Novel "The Cathedral of the Sea" by Ildefonso Falcones

The bestselling novel "The Cathedral of the Sea" takes place around 700 years ago - at a time when Barcelona was one of the most prosperous and growing cities in Europe. At that time, the residents of the humble Ribera district decided to build a new church - by the people for the people. This church was dedicated to the patron saint of seafarers: Santa Maria de la Mar. The construction of the church was a real feat. But the inhabitants of Barcelona, ââboth poor and rich, also had to deal with various problems at the time...

The literary tour "The Cathedral of the Sea" was inspired by the novel by Ildefonso Falcones. After reading this bestseller, you'll see the Gothic Quarter and El Born neighborhoods in a different light. A visit to the church is therefore a must for anyone who has read the novel enthusiastically. During the approximately 2.5-hour tour, you will explore the original locations of the book, which are described in such fascinating detail. Come with us on an exciting journey through time and immerse yourself in the living environment of the inhabitants of Barcelona in the 14th century!

The construction is unique and was groundbreaking for the time. The church was created in the 14th century in just 55 years by the master builder Berenguer de Montagut, and it was consecrated in 1384. The short construction period meant that the Santa Maria del Mar has a very uniform-looking architecture, here have not changed through a centuries long construction period mixed the architectural styles.

The church is extraordinary and really beautiful.

Guided tours to the Cathedral of the Sea


You should allow about 1 hour to visit the basilica.

The immediate vicinity of the church is also worth a visit: you should not miss the Patisseria-Xocolata "Bubó Barcelona" on the forecourt of the church. The cakes look absolutely stunning and are just as delicious. Just 100 meters away on Plaça de Jacint Reventós is the tapas and pintxo bar Sagardi BCN Gòtic. Delicious.