Experience this masterpiece of modernisme - a hospital to feel good

Founded around 600 years ago, the "Hospital Sant Pau" developed from a medieval welfare house into a modern hospital complex.

Today the "city within the city", as the hospital complex is also called, is one of the most important and most beautiful complexes of modernism.

The clinic complex was declared a World Heritage Site by UNESCO in 1997 due to its "architectural uniqueness and artistic beauty". In 2001 the 600th anniversary of the hospital was celebrated.

Tickets for the Hospital Sant Pau 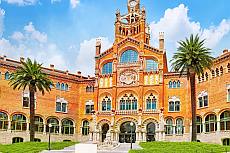 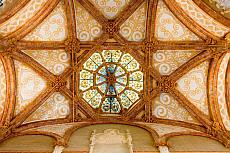 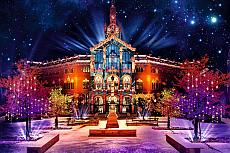 
The history of the Hospital Sant Pau

In 1348, the black plague spread through Barcelona and as a result around a third of the population at that time died. With the help of this terrible apocalypse, the need for an organized health system became more and more apparent to people.

With the first modernist building, the "Castell dels tres Dragons", the architect Lluís Domènech i Montaner is now considered the founder of modernism.

The Hospital de la Santa Creu was founded in 1401. At the beginning of the 15th century, a comprehensive hospital complex was built to bring the six existing hospitals in Barcelona all under one roof. The origin of the hospital is in the district of El Raval, the hospital building in its original location is a splendid example of gothic civil architecture. In it, Antoni Gaudí died in 1926 after a traffic accident. Today it houses the Faculty of Medicine and the State Library of Catalonia.

In the late nineteenth century, thanks to the increasing industrialization, there was an economic and social boom in Spain and a major expansion of the urban area of ââBarcelona. Health care also made a leap into scientific medicine and had to face new hygienic principles. In addition, the buildings in the narrow El Raval district became too small and plans were made to expand the hospital complex.

In 1902 the legacy of the banker Pau Gil made it possible to build a new hospital. So on January 15, 1902, construction work began with the laying of the foundation stone at its current location - only about 1,000 meters from the Sagrada Familia. From then on, the hospital was called "Hospital de la Santa Creu i de Sant Pau" in his honor. A good thirty years later, on January 16, 1930, the new hospital was handed over to the Spanish King Alfonso XIII.

After almost 80 years, hospital operations moved to the new building directly behind the Modernisme complex, and the historic facility, including the sickrooms, has been open to visitors ever since.

Hospital Sant Pau - The city within the city

The hospital was to be something very special: in a relaxing, tree-lined environment where patients could recover from their illnesses and pains and breathe fresh, clean air. The medieval and Moorish-influenced architecture - typical of much Catalan Art Nouveau - makes it difficult to tell that this is a hospital. The orientation of the buildings to the north-south axis of the site allows for maximum solar radiation on the facades of the pavilions. In addition, the design as a "Park Hospital" created open areas for the well-being of patients, which was considered a novelty at the time.

The hospital area takes up almost an entire block - the almost 30 buildings are located in a park. With the inclusion of two gardens per pavilion, the architect Lluís Domènech i Montaner gave the complex a cheerful, optimistic character that helped the sick and their families to feel better. Horse chestnut, linden and orange trees line the central promenade and provide shade in summer. Medicinal medicinal plants such as laurel, lavender, rosemary and lemon trees grow in the roadside beds.

At the main entrance to the Hospital de la Santa Creu i Sant Pau complex is the chapel-like administrative building with a large domed roof and an impressive entrance hall with marble columns and mosaic-covered ceilings. It is no coincidence that the building looks like a church, as it is intended to symbolize the Christian tradition. At the same time, the building should represent a person who spreads his arms and welcomes the patients with open arms.

Behind the administration building you can see the pavilion with the operating room in the middle. The tunnel system that connects the pavilion to the others allowed the patients to be quickly transferred to their rooms.

At the end of the original area was the monastery pavilion. The building was designed by Pere Domènech, son of Lluis Domenèch i Montaner. It consists of three parts connected with small covered pedestrian bridges. The service areas of the hospital were housed here, such as the kitchen, pharmacy and accommodation for the nuns who worked here as nurses.

A new building, which is located behind the monastery building, expanded the old hospital and is now home to the modern hospital. The historic modernist hospital can be visited today.

What can be visited

A sightseeing route is signposted in the hospital complex, which you can, but do not have to, follow.

Beginning of the tour and outdoor area

The visit begins in the Sant Salvador pavilion with an exhibition on the hospital from its foundation to the present day. A symbolic dragon pays homage to the work of Domènech i Montaner.

The garden city model created at the beginning of the 20th century was the model for the design of the outdoor areas. You can relax here in a beautiful park and admire the beauty of the exterior facades of the pavilions.

You will experience a journey through time to the 1920s and 1930s: a historic hospital pavilion is recreated here and you can see how a hospital operated in the 1930s. Also see what Barcelona looked like in the 1920s.

Of particular interest is the tunnel system that connected the buildings and through which the patients could be quickly transferred. The tour ends in the representative and richly decorated administration building, which also served as a reception pavilion.

Due to the geothermal installations, which ensure the heat supply to various pavilions of the hospital complex in the form of almost 400 wells more than 100 meters deep, the facility is an example of sustainable construction and an efficient energy balance.

For reasons of hygiene, the entire area has been laid out on a slope: as is well known, the warm air moves upwards - so the ventilation system was developed in such a way that all bacteria and viruses are drawn away from the patients with the draft.

The selected building materials are made of durable building materials that do justice to the function of a hospital. As a typical component of modernist architecture, we find a striking mix of materials such as brick, natural stone, iron, glass and ceramics. The mainly processed material is the red brick, which was used exclusively for facades. This is combined with the natural stone, which was used for all decorative, architectural elements, reliefs, sculptures and in the interior ceiling designs.

The Hospital de Sant Pau can be reached within a 10-15 minute walk directly from the Sagrada Familia via the beautiful tree-lined pedestrian street "Avinguda de Gaudí".

Why the Hospital Sant Pau is worth visiting

The Hospital Sant Pau is a beautiful Modernsime complex, a masterpiece by the architect Lluis Domènech i Montaner. Always with the intention of serving people and their health, he built a hospital that, as a total work of art, offered color and freshness instead of sterility.

As a visitor, you feel completely at ease and wonder why today's hospitals aren't built like that. The hospital is rightly on the UNESCO World Heritage List.

Tickets for the Hispital Sant Pau


Tips for the visit of the hospital


From the Sagrada Familia, the c/Gaudi street leads directly to the hospital. The approximately 1,000 meters are worth walking.
With a guided tour (English) you get a look behind the scenes of the hospital.
You should plan about 1.5-2 hours for the visit (with or without a guide).