The concert hall is a masterpiece by the architect Lluís Domènech i Montaner - alongside Antoni Gaudí one of the most important representatives of modernism. The concert hall of the music palace is impressive.

The builder of the Palau de la Música was the Catalan choir association "Orfeó Català", founded in 1891. Construction began in 1905 and the Music Palace was inaugurated in 1908.

The Palau de la Música Catalana has been on the UNESCO World Heritage List since 1997. The concert hall is one of the most beautiful in the world.

Tickets to enter the Palau 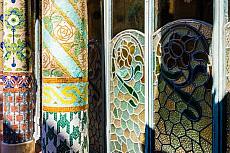 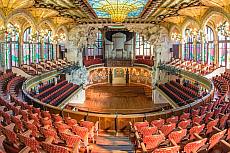 The rapid development of Catalonia towards the end of the 19th century produced a well-to-do bourgeoisie that was looking for new forms of self-expression. Modernisme became an essential means of expression for this aspiring bourgeoisie.

With the first modernist building, the "Castell dels tres Dragons", the architect Lluís Domènech i Montaner is now considered the founder of modernism.

The central element of Modernisme is the merging of different art forms - such as sculpture, blacksmithing, ceramics and glass art - as well as different architectural styles. This can be clearly seen in many places in the Palau de la Música.

The architect of the Palau de la Música was Lluís Domènech i Montaner, the founder and one of the most important representatives of Modernisme. At that time he was the most renowned architect in Barcelona.

The "Orfeó Català", an amateur music society founded in 1891, was very popular in Barcelona around the turn of the century. They wanted to create a special setting for their own performances and those of other artists. Money for the construction came from donations from wealthy merchants and industrialists, and none other than the star architect Domènech i Montaner was hired.

According to Lluís Domènech i Montaner, the Palau de la Música Catalana should be a "garden for music". It is worth immersing yourself in its "musical garden" and being enchanted by the wealth of detail in this extraordinary building.

In the 1980s, the Palau de la Música Catalana was remodeled and modernized under the direction of architect Óscar Tusquets, without losing its original charm.

The facade is richly adorned with mosaic pillars, each one with a different floral design. Busts of great masters such as Beethoven, Bach and Wagner bear witness to the prevailing taste in music at the time. On one corner is a sculpture dedicated to the Catalan folk song and ruled by the patron saint of Catalonia, Sant Jordi. Elements from the Gothic and Moorish architectural styles have also been incorporated into the design of the facade.

One of the most distinctive concert halls in the world - the Concert Auditorium - has been the privileged setting for national and international musical life in the city of Barcelona for more than a hundred years.

The stage is dominated by an organ, which can be heard again after a restoration in 2004. The auditorium is a mystical and paradoxical hall full of characters like the 16 muses surrounding the stage playing different musical instruments from different countries and regions. They symbolize the different styles of music and embody the spirit of the Palau de la Música Catalana - a performance venue where every genre of music should find its place.

To the left and right of the stage are two other imposing sculptures, a bust of Anselm Clavé on one side and a bust of Beethoven on the other. These symbolize folk and classical music.

A lot of glass makes the music palace very bright and gives it a very special atmosphere. Light shines through stained glass windows and a central skylight, a downward-curving, glass and colorful dome symbolizing the sun.
The auditorium is filled with natural light.

The decorative elements made of ceramics with natural forms are also typical of Modernisme: a number of natural motifs such as flowers, palm trees or fruits adorn the room.

Rehearsal room of the Orfeó Català

Another venue that the Palau has is the Petit Palau: a modern auditorium that opened in 2004 and is ideal for chamber music or small-scale concerts. It has excellent acoustics and high-tech audiovisual equipment.

Another very special part of the Palau is the Sala Lluís Millet, a meeting place during breaks dedicated to Maestro Millet, founder of the Orfeó Català. The hall is two stories high, with large stained glass windows decorated with floral designs, creating an extraordinary effect. Even more extraordinary is the balcony seen through these windows, with its double colonnade decorated with distinctive colors and ornaments.

Another exceptional place is the foyer of the Palau, which can accommodate a large number of people both during performances and as a separate restaurant-cafeteria. The wide arches of brick and green ceramics glazed with floral patterns give this area a distinctive atmosphere.

What music is played

Which music genres are played in the Palau de la Música is easy to answer: "Every kind of music is played in the Palau de la Música - except operas, because these are shown in the Gran Teatre del Liceu". This is how visitors experience it during a guided tour. However, this statement is not 100% correct: it does happen that an opera is on the program, but very rarely.

Why a visit to the Palau de la Música is worthwhile

The building is simply impressive and imposing. This is where Modernisme shows itself from its most beautiful side, the Palau is truly one of the most beautiful works of Catalan Art Nouveau. Treat yourself to a short break in the foyer of the concert hall. The cafe is quite cozy and nice.

Tips for the visit of the Palau de la Música


Plan about 1.5-2 hours for the visit.
If you want to attend a concert, we recommend booking the tickets in advance.