Bellesguard was Gaudí's only work for which he had to find a client. With the building he created a homage to the Middle Ages and interpreted the Gothic style in his own way.

The Torre de Bellesguard is a work by the architect Antoni Gaudí that has received little attention up to now. You can see a number of elements in the extraordinary building that were perfected in his later works.

It was the special location of the property in the quiet district of Sant Gervasi and the special history of the house that prompted Gaudí to buy the property and build a new house on the medieval ruins.

Tickets for the Torre Bellesguard 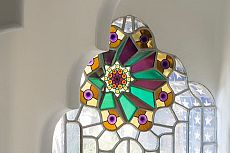 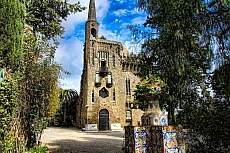 
History of Bellesguard - the legacy of Bishop Joan Grau

Bishop Joan Grau i Vallespinós, a good friend of Gaudí, demanded in his will that all possessions be sold and that the proceeds go towards building a school.

Antoni Gaudí - formerly commissioned by the bishop to build the Palace of Astorga - knew that a house from the episcopal estate was built on the ruins of a medieval palace dating back to 1408. This palace was built by Martín I el Humano, the last king of Aragon.

Martin I once called the house Bellesguard, Catalan for "beautiful view". In the palace he learned of his son's death. In the presence of Pope Benedict XIII and San Vicente Ferrer, he married his wife Margarita de Prades at Bellesguard to present an heir to the royal house of Aragon. The marriage remained childless until the death of Martín I on May 31, 1410, however, and the Castilian dynasty Trastámara took over the rule.

Pope Benedict XIII. was the most important anti-pope at the time of the western schism, i.e. the temporary split in the Roman Church, and had his seat in Bellesguard Palace for a short time. He is not listed in the official list of popes.

Although almost nothing remains of the Gothic palace, the historical importance of this place was an irresistible temptation for the Catalan Gaudí. His interest in this place was so strong that he acted as an intermediary between the executor and a buyer: the land and ruins were bought by Maria Sagués, widow of Jaume Figueras, a wealthy flour merchant and ardent Gaudí devotee.

The first thing Gaudí built on the site was a viaduct made from the stones of a palace wall that lay on the property. The path to the cemetery of Sant Gervasi, today a street, led over this viaduct. The viaduct is similar to the viaducts in Park Güell.

Gaudí worked on the Bellesguard from 1900 until its completion in 1909.

Gaudí's interpretation of the Gothic

The Torre Bellesguard is a detached building with a square floor plan, with diagonals pointing to the four cardinal points. In honor of the heyday of Catalan Gothic, he interpreted the Gothic style with the house in his own way: although there aren't that many Gothic elements to be found on the building, it does have a Gothic appearance. This impression is particularly shaped by the large portal with its round arch, the elongated windows and the façade crowned with battlements.

Gaudí reinterpreted an essential feature of the Gothic style: he provided the round arch of the main entrance with large hexagonal and octagonal tesserae. The texture of these stones is in striking contrast to the grey-green slate of the rest of the building. By using the slate stones that Gaudí found on the property, he managed to blend the house harmoniously into its surroundings.

The interior of Bellesguard

The interior of the building contrasts with the dark facade. The building is bright and flooded with light. The bright white of the stairwell, painted with plaster and lime paint, puts the focus on the forms designed by Gaudí.

While Gaudí was inspired by the Gothic style for the façade, the interior is reminiscent of Moorish and Mudejar architecture, which was shaped by the three major world religions of Islam, Judaism and Christianity. The staircase with its colorful wall tiles and curved arches gives the building the atmosphere of an Andalusian palace. One can guess here how much Gaudí was impressed by this type of construction.

The roof of the building

Gaudí believed that detached houses had to have double roofs to insulate against the summer heat. The modern insulation materials of today were unknown at the time.

The lower attic is a large room that occupies the entire footprint of the house. The roof construction is supported by eight pillars and numerous brick arches. The construction seems almost filigree. "There are things about this house that you don't know why they are holding up," an employee of Gaudí is said to have said about this construction.

He provided the upper, 70m" large attic with a pointed arch, which takes the form of a truncated pyramid on the outside. At the top there is a viewing platform from which you can get a wonderful view of Barcelona.
Gaudí used slate as the outer wall of the roof. A circuit runs around the roof, the battlements form the railing.

Why Bellesguard is worth visiting

Bellesguard is less spectacular than other buildings designed by the brilliant architect Antoni Gaudí. Nevertheless, it is worth visiting the building: it is very beautiful and, with its particular architecture, it represents a very early work of Gaudí. The small park invites you to linger and enjoy the peace and quiet.

A visit to Bellesguard is sure to help you understand Gaudí better and understand his artistic development. Some elements can be recognized in his later buildings in a modified form.

(Click on the product images to display prices and availability)


Bellesguard is a little off the metro lines. Just a few meters from the FGC station "Tibidabo", take the bus 196, which stops in front of the Bellesguard.
With the Barcelona Card you have free use of the FGC and the bus.
We recommend to schedule about 1 - 1.5 hours for the visit.